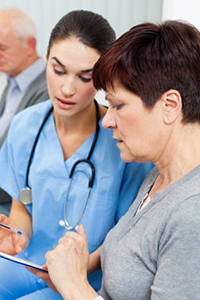 Research has shown that anastrozole is more effective than tamoxifen in preventing the return of cancer in post-menopausal women who have an early breast cancer removed. In these women it reduces their risk of developing a new cancer in the opposite (contralateral) breast by 53% compared to tamoxifen1. This is a very strong indicator that anastrozole will be more effective than tamoxifen in preventing breast cancer in women who have not yet developed the disease.

Research has also shown that anastrozole has fewer serious side effects than tamoxifen, which can cause womb cancer and blood clots. Anastrozole does have some side effects such as hot flushes, vaginal dryness and an increase risk of osteoporosis1. Because of this risk, women who joined the prevention trial had a spinal x-ray and a bone density scan (DXA scan) to ensure that they had a safe level of bone density. Those women who did not have a safe level were told that they can only join the study if they were willing to take a bisphosphonate (bone strength medication). In this way, those women at high risk of bone fractures are identified and can be offered a preventive treatment.

Who are IBIS-II Prevention participants

3864 women from 149 centres in 16 countries have enrolled to take part. The trial closed for recruitment in January 2012. Participants are on treatment for 5 years, after which time their health is followed up for a number of years. In order to join the trial participants had to:

Women were not entered into the study if they:

Women were encouraged to discuss all options with their doctor before making a decision to take part in IBIS-II.

In December 2013 the first results of IBIS-II Prevention were published ². The data of nearly 4000 women were analysed and were very positive. Participants being treated with anastrozole were 53% less likely to develop breast cancer than those on placebo. There were 40 cases of breast cancer reported in the anastrozole group compared with 85 in the placebo group.

Although women on anastrozole suffered more joint, bone and muscle aches and more hot flushes, these side effects were less than expected in comparison to other research studies on anastrozole and only slightly more common than for women on placebo. There was only a small increase in fractures with 164 reported for women on anastrozole compared with 149 in the placebo group.  This increase was probably not larger because every woman had a bone density scan before joining the trial.  This ensured that those with low bone density were monitored closely and treated appropriately.

In addition, we have found that women on anastrozole in IBIS-II are less likely to develop other cancers too with 40 cases being found in women taking anastrozole compared with 70 reported in the placebo group. This is reassuring but the reasons for this are unclear and needs further research.

These results are very important and provide us with crucial information about the effects of anastrozole in preventing breast cancer in women at high risk of the disease.  It is hoped that these results will lead to a change in clinical practice with anastrozole being routinely prescribed as a preventative medicine to women at high risk of breast cancer. The trial is now closed to recruitment and the last patient who entered the trial will finish their 5 years of treatment in January 2017. The participants who are taking part in this research will be followed up for several years to find out about any important health events.